K-Haven first launched on GeoCities in March, 1998 as "Kloraff's Ultimate Stuff Site". The Original website, created in a trial version of Microsoft Publisher 97, featured a black starry background with a lot of white text. The site originally focused on gaming. Downloads included original freeware games made and compiled in QBASIC as well as user generated maps for some late 90s PC games.

K-Haven was created during the summer of 1999, and was launched in September 1999 to replace "Kloraff's Ultimate Stuff Site". The new K-Haven featured reviews of several classic PC Games and often included cheat codes, and user generated map content for  download. The new K-Haven also featured an entertainment section with reviews of a selection of popular T.V. shows and movies. On a regular basis a list of Kloraff's Top 5 PC Games and Top 5 TV Shows was published and at the end of every year a new top 5 Movies of the year list was posted. 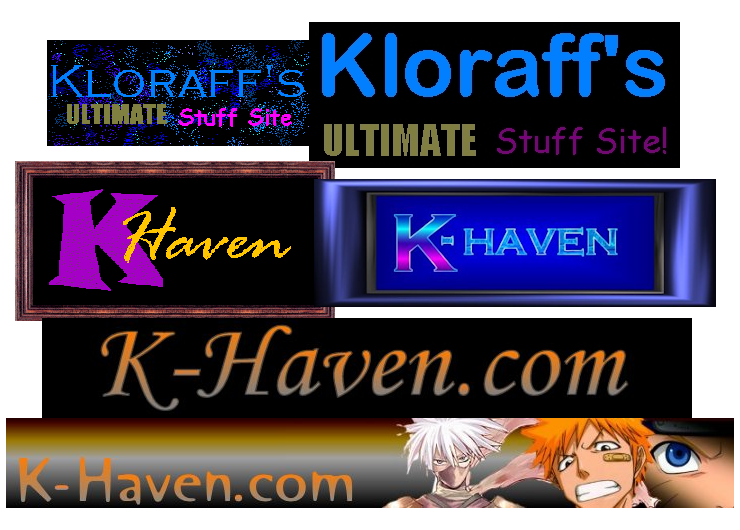 In mid-2001, "K-Haven" switched to a new blue color scheme and finally featured a layout with frames. This version of the website site was originally going to relaunch in green instead of blue but the green graphics were scrapped because the buttons in the frame to the left just didn't look right. In 2003, K-Haven got yet another new look with text links in the frame to the left replacing buttons and another color scheme change to dark grey and orange. In 2005, the focus shifted to include original Web comics, Anime and Online gaming related content in addition to the PC game reviews and soon thereafter dropped the TV and Movie review content.

In 2008, K-Haven.com discontinued it's traditional PC gaming, and Anime content and shifted focus yet again, this time to providing radio and television related frequency and channel guides for Atlantic Canada. The main page offered simple image links pointing to the existing web comics, which themselves were were discontinued soon after, and to the new radio and TV information websites. A first attempt at a blog was created in 2012 as well as a K-Haven Classic section to highlight select pages of previously removed, but still relevant content. K-Haven also hosted a number of phpBB forums for online gaming guilds which have since been disbanded and their forums shut down. The addition to the online gaming landscape of services like Discord have rendered the more traditional phpBB style forums obsolete.

In 2018, K-Haven migrated to a new hosting platform and continued to provide access to Atlantic Canadian Radio and TV Channel guides as a WordPress site. Looking forward, K-Haven would like to eventually try out another blog and a gallery for traditional landscape oil painting. Over the website's quieter years oil painting has become somewhat of a hobby for a man who since the website's inception in 1998, has finished both high school and university, gotten married and helped to bring three young children into this crazy world. K-Haven after all has been a rather expensive passion project that despite life's challenges will hopefully continue to find purpose in one form or another for many years to come.